Recent data suggest the labor market remains quite strong. The unemployment rate is the lowest it’s been in decades, people are being drawn back into the labor force, and wages are growing at a more respectable pace. Perhaps most encouraging to me is the better pace of wage growth on the lower end of the income spectrum. Rising economic inequality has been a sizeable drag on economic growth for many years. Fortunately, it would appear that US workers can expect the good times to continue for a while. Continued low inflation should keep the Fed from applying the brakes through interest-rate hikes, and a shortage of available labor will likely mean that US companies will increasingly have to pay up to attract qualified workers. All good news for US workers.

But the news isn’t all rosy. There is one important element missing from the largely positive labor-market story. The Bureau of Labor Statistics reported last week that labor productivity fell 0.3% from the second quarter to the third quarter – the first decline since the fourth quarter of 2015. On a year-over-year basis, productivity increased just 1.4%. Although the weakness in the quarter was partially due to growth in self-employed workers, like Uber drivers, that factor only accounts for a portion of the weakness. Even after adjusting for the effects of the “gig economy”, this most recent report on productivity continues a trend that’s been in place since the end of the Great Recession. In the years leading up to the recession (2000-2007), growth in labor productivity averaged 2.7% annually. In the years following the recession the pace has averaged just 1.2%. This may not seem like a big difference, but it is. The pace of productivity growth can and does influence the pace of wage growth, and that can be seen in the chart below. 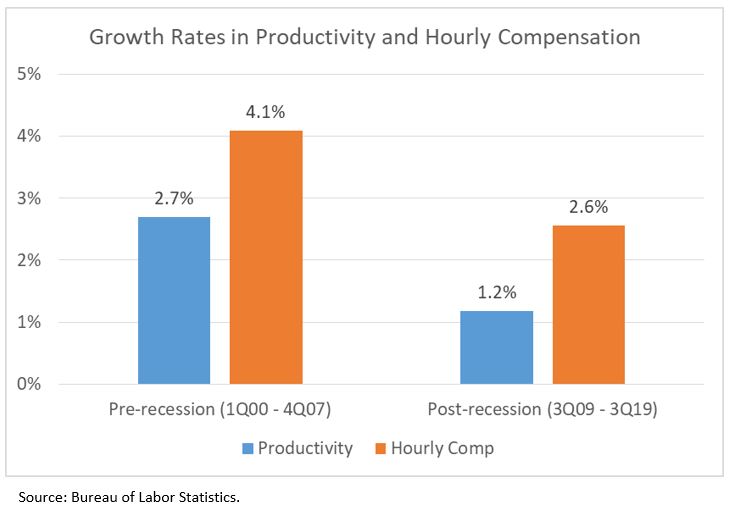 The dramatic deceleration in productivity growth is largely the result of a relative lack of investment. Business investment has been held back, in part, due to low labor costs. A massive amount of slack in the labor market following the Great Recession meant that businesses were not required to pay up to attract workers. So rather than make major investments in equipment and new technologies, for example, many companies have found it more cost-effective to hire additional cheap workers instead. Choosing workers over expensive equipment also provides more flexibility to adapt to lower-than-expected demand (layoffs). Which brings me to my next point. Businesses have also been reluctant to make major investment expenditures because demand for their products and services has been relatively subdued and highly unpredictable. Contributing to the uncertainty in recent years has been weak economic growth outside the US and the effects of the trade war with China. Until those issues are resolved, it’s hard to see business investment picking up in earnest.

Productivity growth has also been negatively affected by a relative lack of investment by governments. We have long argued that the huge deficits created by the 2017 tax cuts would have been much more impactful if the money had been spent on things that have the potential to drive sustainable economic growth. Economists generally agree that factors like educational achievement and infrastructure modernization can be highly effective in boosting labor productivity and therefore economic growth. But these deficiencies were not addressed in the Tax Cuts and Jobs Act (TCJA). Instead, policymakers chose to double-down on “supply-side” initiatives, including major tax cuts, which have thus far been unsuccessful in generating more than a short-term boost to economic growth.

The reason that tax cuts and ultra-low interest rates have been impotent is that access to cheap capital has not been the factor inhibiting investment spending. In fact, ready access to very cheap capital has been a defining characteristic of the post-recession years. Therefore, increasing the supply of cheap capital at this point has mostly been an exercise in futility (see Europe). Instead, we need to properly identify the cause of the problem, which is relatively low and unpredictable demand. Ours is a demand-side problem that will require a demand-side solution. In my estimation, the solution has to include a wider distribution of income/wealth so that money gets into the hands of those most inclined to spend it! And no, I’m not advocating for a large-scale redistribution of wealth in this country. But one highly effective way to lift up the middle class is by making investments in the things that have been proven to drive productivity growth, like education and infrastructure. 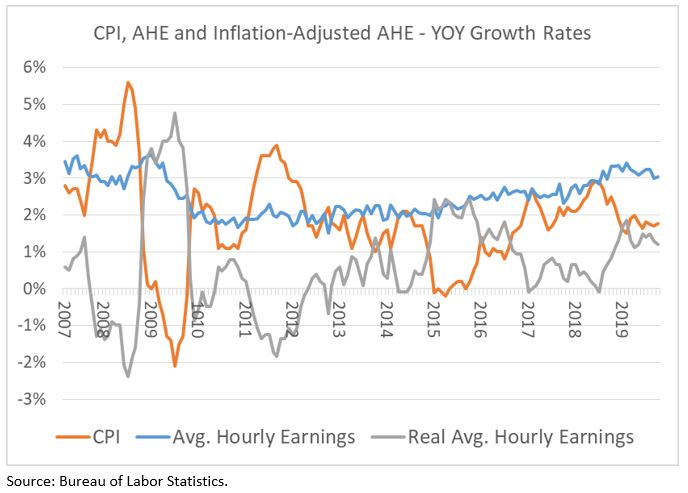 Productivity and Stock Prices
The chart below shows that labor costs are picking up, even without a meaningful increase in productivity growth. In other words, what’s good for workers may not be so good for businesses. In fact, the tightness in the labor market could become quite problematic for US businesses in the not-too-distant future. For now, some metrics appear to show that wage growth may have plateaued. Growth in Average Hourly Earnings, which is represented by the blue line in the chart above, is one of those metrics. Even so, the relative dearth of available labor means that wage growth could very well re-accelerate in the coming months/years. If that is indeed the case, corporate margins and profitability may increasingly suffer from higher labor costs even as better revenue growth remains elusive. In last week’s Market Commentary we told you that earnings estimates for S&P 500 companies have been revised downward by about 8% for each of 2019 and 2020 due largely to weak global growth and the effects of the trade wars. Yet market strategists are still highly optimistic regarding the earnings outlook for next year. The current consensus estimate for 2020 assumes almost 10% growth over the current consensus estimate for 2019. Is this a realistic outcome if labor costs, which are the single-biggest cost category for most companies, start to rise at a faster pace? Probably not. 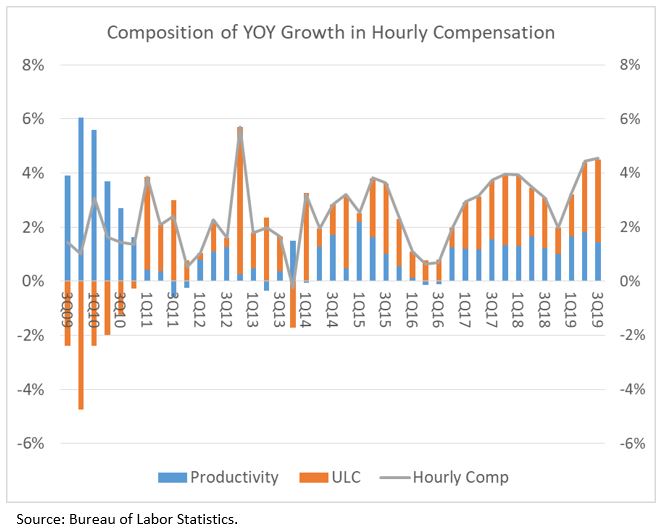 The upside to faster wage gains is that businesses will start to invest more heavily in labor-saving equipment, plants, software and other technologies. This investment cycle is overdue, but it should be recognized that the benefits of those investments are likely to accrue only over a period of years. Even less promising over the near-term is the potential for increased government spending on infrastructure, education and other drivers of productivity growth. The political climate has become so polarized that I’d be surprised to see any major legislation pass in the foreseeable future. And so for now, the latest productivity data from the Bureau of Labor Statistics adds to the growing evidence that our economic growth potential, despite big tax cuts and growth in government spending, is probably capped at the 2.0-2.5% level. Yep, it looks like slow and low for a while longer until we get more thoughtful and predictable policies, to include a resolution to the trade war with China and investments that target the real source of the economic sluggishness (and it’s not a lack of low-cost capital).