With over 436 of the S&P 500 companies having already reported third-quarter results, we thought we’d take a look at where we stand. First the good news. The companies that have reported earnings so far have exceeded expectations by nearly 5% in aggregate. This is not atypical as most management teams are careful to set the bar low enough to easily hurdle. The companies most likely to exceed expectations in the third quarter operate in the Health Care, Information Technology and Consumer (both Discretionary and Staples) sectors, while companies operating in the Energy sector are reporting earnings just slightly ahead of expectations, on average. The fact that all eleven industry sectors have surpassed expectations should tell us something about the degree of sandbagging that goes on.
Now the bad news. For the third consecutive quarter, the companies in the S&P 500 have collectively generated almost no earnings growth. Most market mavens attribute the lack of earnings growth to weak economic growth outside the US and the uncertainty surrounding the trade war with China. The trade war, in particular, has inhibited manufacturing and business investment in the US. And although manufacturing has become a smaller part of our economy in recent years, a manufacturing contraction can have disproportionate psychological and political effects. Fortunately, a healthy job market, rising wages and asset prices, and ready access to credit have enabled the consumer to keep spending, especially on services. Everyone is counting on this trend to persist, at least until there is some kind of meaningful resolution to the trade war. The alternative scenario is that the continued drags on business profitability will lead to job losses and lower wage growth, both of which would obviously impair the consumer’s ability to spend as freely. We are coming to a crossroad, and it could go either way.
I keep showing you the charts below because I believe they contain some of the most relevant data available for investors at this stage in the bull market…and it keeps getting more ominous. The first chart shows the magnitude of the decrease in earnings estimates (blue and orange bars) since the estimates started to decrease over a year ago. Since September of last year, estimates have now dropped a total of about 8% for both 2019 and 2020. The chart also shows that coincident with this decrease in earnings expectations has been a sharp increase in price-to-earnings (P/E) ratios (gray and yellow lines), which effectively tell us how much investors are willing to pay for a dollar in earnings.
In a nutshell, the bull market we’ve enjoyed this year has been based on a wing and a prayer rather than any concrete evidence of rising corporate profits. The drop in earnings estimates and increase in stock prices have led to P/E multiple expansion of over 4x since the low in December of last year. At current levels, the S&P 500 is trading at nearly 19x the consensus estimate for 2019 and over 17x the consensus estimate for 2020. If we compare the latter to the current estimated two-year annual growth rate in S&P 500 earnings from 2018 to 2020, which has halved to about 5%, the PEG ratio for the market has more than doubled to the current 317% (second chart). The way to interpret this number is that investors are now willing to pay more for far less earnings growth. The market is clearly telling us that some positive developments are expected to improve the earnings outlook, if not in 2020 then beyond. 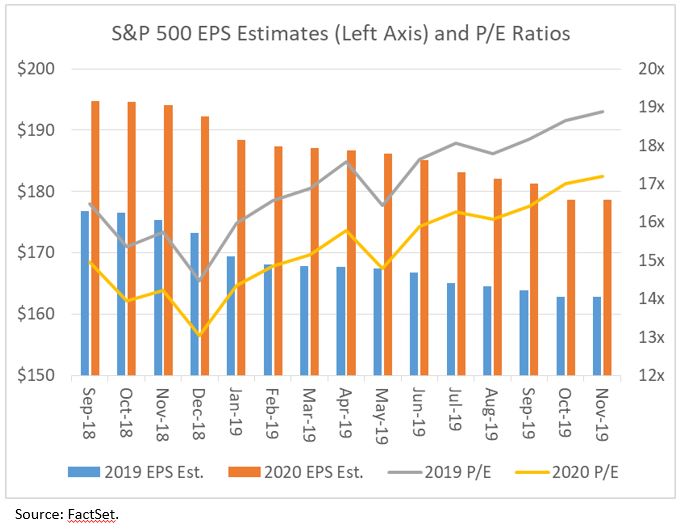 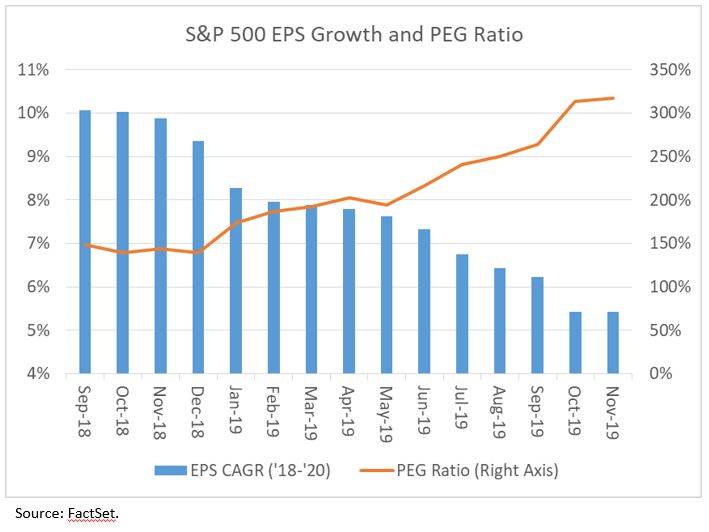 The margin for error at today’s stock prices is shrinking. The strongest argument for steadily rising P/E ratios has been that interest rates have been very low. But after falling dramatically from recent highs in November 2018, to their lows in late September/early October of this year, interest rates have bounced materially. The yield on the 10-year Treasury bond has increased from a low of about 1.46% to the current 1.92%. And this has happened despite three recent rate cuts by the Federal Reserve. Rising interest rates have the potential to negatively affect not only asset prices like stocks and real estate, but also business investment and consumer spending. Will the increases in rates stop before causing too much damage? Will rising rates cause another “taper tantrum?”
The bottom line is that further market gains have become dependent on not only a positive resolution to the trade war, but also a stabilization of the recent rise in interest rates. A third potential headwind is the fact that investor sentiment has spiked to very high levels as evidenced by the relative volume of call versus put options (among other metrics). Usually when sentiment becomes overly bullish a reckoning lies somewhere in the not-too-distant future. Do these headwinds preclude further increases stock prices? Of course not! There is no way to time a market top just like there is no way to time a bottom. The best we can do is remain invested while sticking to investments that have the fundamental strength to participate in up markets while limiting damage in down markets. Trends can and often do last much longer than anyone expects.