The Fed took the path of least resistance yesterday, lowering the Fed Funds rate by 0.25%. The action, which had been widely anticipated by market participants, did not have an immediate impact on the financial markets. However, things got a little dicey during the course of Chairman Powell’s press conference. Powell said that yesterday’s rate cut should NOT be viewed as the start of a new cycle of rate cuts, but rather a “mid-cycle” adjustment designed to address economic weakness outside the US, trade friction, and uncomfortably low inflation. The domestic economy, according to the Fed, is doing just fine, thank you. Unfortunately, that’s not what investors wanted the hear.   The markets had been expecting the Fed to display a greater sense of urgency about the need to boost business investment and inflation. More specifically, the consensus expectation was that the Fed would foreshadow another rate cut or two by the end of the year. But it wasn’t to be. And at the end of the day, it was the Fed Chairman’s rhetoric, rather than the Fed’s actions, that created the market volatility.
From my perspective, the drop in stocks is the least interesting of yesterday’s market reactions. Investor attention should be focused on what happened in the bond and currency markets. First of all, the yield on the 10-year Treasury fell to its lowest level in almost a month. If the markets really expect that the Fed’s 0.25% rate cut yesterday will be enough to jump-start economic growth and boost inflation, longer-term interest rates would be going up and not down. Second, the yield spreads between long-term Treasuries and short-term Treasuries compressed following Powell’s Q&A session. The spread between the 2-year and 10-year Treasuries fell to its lowest level since May. The spread between the 3-month and 10-year Treasuries fell a bit further into negative territory – a condition known as an “inverted yield curve.” Narrowing yield spreads are also an ominous signal about future growth prospects. Had the Fed taken the right course of action, according to Fed critics including President Trump, the yield curve would have steepened rather than flattened.

Source: Bloomberg
Action in the currency markets was also telling. The US Dollar Index (USDX) surged to more than 2-year highs following Powell’s comments. The dollar is rising in value against the other major currencies due, in part, to the relatively high yields that can be earned on US Treasury bonds compared to bonds issued by the German or Japanese governments, for example. The strong dollar also reflects the fact that the US economy is in better shape than most of the rest of the world. In a nutshell, investors view the US as the best place to invest due to its relative safety, superior growth and higher bond yields. At the moment, it’s hard to dispute that notion. If that remains the case, the dollar should continue to appreciate.
But while a strengthening dollar does carry its benefits, it also acts as a dampener on economic growth and inflation. A strong dollar makes it harder for US companies to compete with their foreign counterparts, both in the US and abroad. And if US companies are finding it harder to compete, that can affect the US labor market and the economy at large. This is one of the main reasons (the other being higher stock prices) that the Trump administration has been so critical of Powell and the Fed. In calling for aggressive interest-rate cuts, President Trump is effectively encouraging the Fed to engage in a currency war with the other central banks. He believes that aggressive rate cuts by the ECB and BOJ and others must be met in kind so that dollar appreciation does not hurt US corporate competitiveness. Yep, it all comes back to trade. 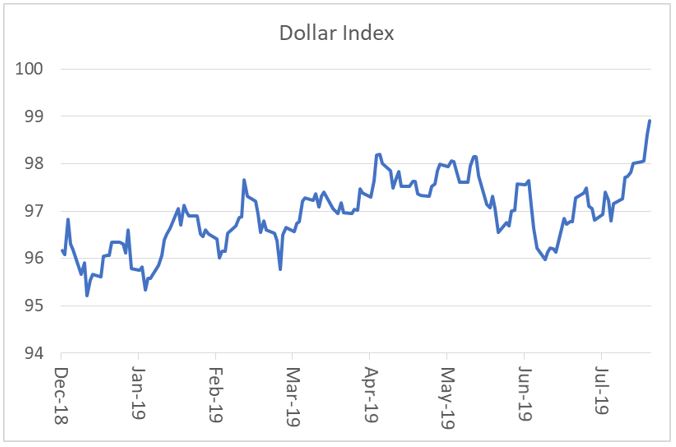 Source: Bloomberg
For now, Powell and the Fed are resisting the intense pressure coming from 1600 Pennsylvania Avenue. But how long can that continue? Will it continue if stock prices fall 5%? 10%? 20%? What if we are unable to resolve our trade disputes with China and others and our trade deficits continue to grow? What if the housing market continues to soften or business investment remains depressed? This is the problem with depending on the Fed to cure all of our economic ills. Monetary policy is a very blunt instrument, and its potency has been watered down significantly. But that doesn’t mean they won’t try the same old tricks. If economic and/or market conditions worsen in the near future, we fully expect the Fed will open up the spigots again. And if the multiple ongoing trade wars remain unresolved, economic nationalism could intensify and evolve into blatant currency manipulation. It’s very hard for anyone to win a war like that.
Our view has been that cheaper money is highly unlikely to produce the desired outcomes of 3%+ GDP growth, low unemployment, and 2%+ inflation. Several years of ZIRP (zero interest-rate policy) were clearly successful in boosting asset prices, preventing deflation and supporting moderate economic growth in the wake of a nasty recession. But they also led to massive debt loads, pulled forward demand, and exacerbated the growing problem of economic inequality. Achieving the kind of economic conditions targeted by the Trump administration will require a broader distribution of incomes and wealth so that money gets into the hands of those most likely to spend it. The best way to achieve that goal is through investments that improve productivity and competitiveness in an increasingly global economy. So far, it appears our leaders have very limited appetite for such investments.
In an environment like this our best advice is to own quality companies, which means strong balance sheets, excellent management teams, and relatively predictable earnings and cash flow. Trying to time the markets by getting in and out is an exercise in futility. So don’t get distracted by all the noise in Washington and beyond! Stay invested, and remember that slow and steady most often wins the race.