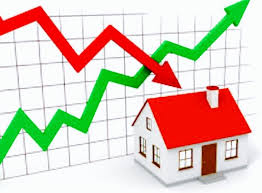 I’ve read several articles recently that talk about a slowdown in the housing market. We had speculated in our March 14 Market Commentary that the writing was on the wall. The issue is affordability. Housing prices have been rising at a much faster pace than incomes since 2012. Mortgage rates have risen by over a third from their lows to over 4.5%. And some banks and mortgage companies have been incrementally tightening their lending standards as the credit cycle gets long-in-the-tooth. Today, with the yield on the 10-year Treasury bond hitting 3.0% for the first time since May yesterday, we thought we’d revisit the subject of housing.

The first chart below shows that following about three years of fairly stable home sales (we’ve combined new and existing home sales in the chart) and consistent growth in transaction prices, we are beginning the see the tide change. Both the number of homes sold and the weighted average transaction price have now declined for four straight months. And though you can’t see this in the chart, the median sales price for a new home actually declined by over 4% YOY in both May and June. 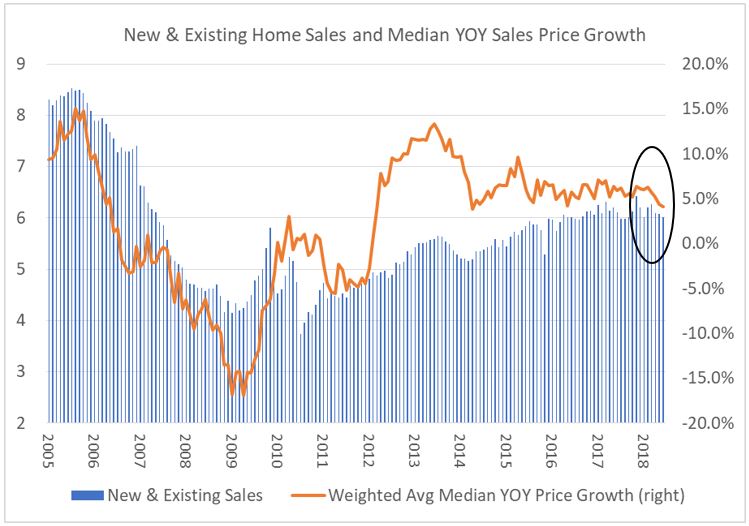 Sources: U.S. Census Bureau and National Association of Realtors
The next chart shows that housing starts and building permits were each at nine-month lows in the month of June. 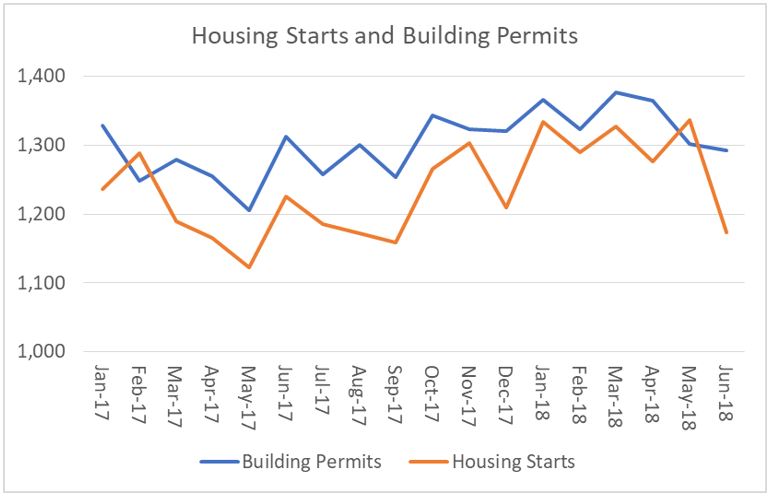 Source: U.S. Census Bureau
The next chart shows that the supply of existing single-family homes has bounced to its highest level since February, 2017. While supply is still relatively low (4.1 months at the current sales pace), we think the trend is the more important issue. 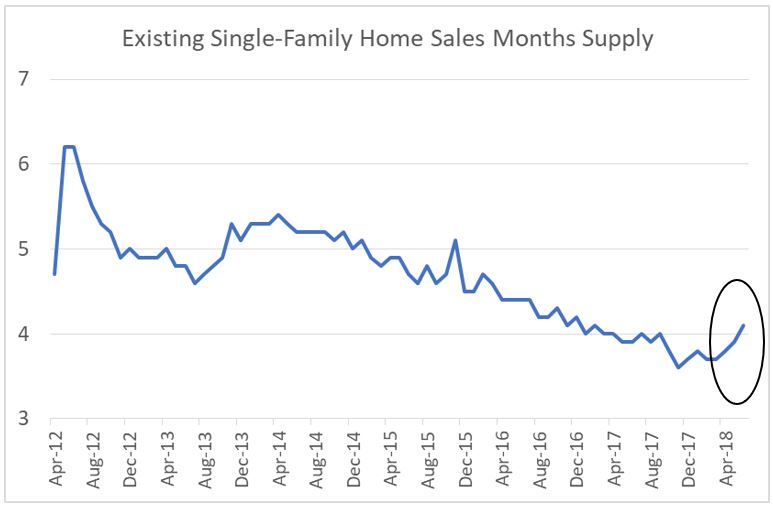 Source: National Association of Realtors
Next, you will see that growth in Residential Investment, which is a component of GDP reported by the Bureau of Labor Statistics, has been negative in four of the last five quarters. 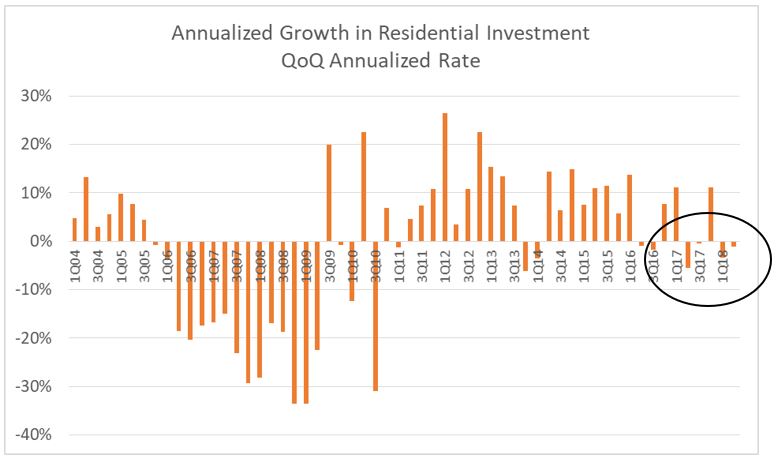 Source: Bureau of Economic Analysis
Perhaps the most important factor in the housing slowdown is the fact that housing prices have been rising at a much faster pace than incomes for nearly all of the past six years. Home prices and incomes, along with mortgage rates, are the three factors that determine housing affordability. 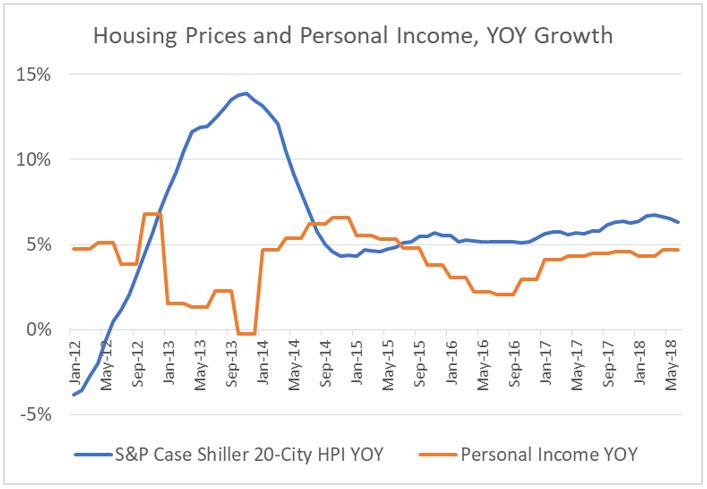 Sources: S&P/Case-Shiller and Bureau of Economic Analysis
And here is the third factor, mortgage rates. You can see that a combination of Fed policy normalization, rising inflation, some tightening in bank lending standards, and better economic growth have caused mortgage rates to rise to their highest levels since 2011. 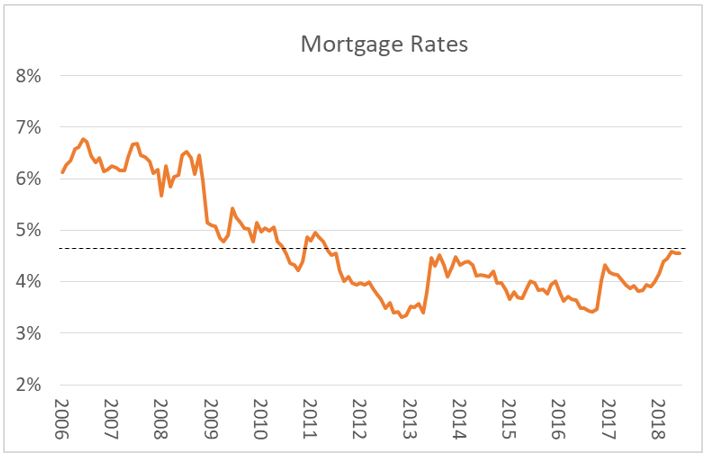 Source: Freddie Mac
Pulling it all together, we can see that housing affordability is the lowest it’s been since 2008. The NAR has yet to report its reading for the second quarter, but we suspect that continued increases in housing prices and rising mortgage rates will bring the index down even further. 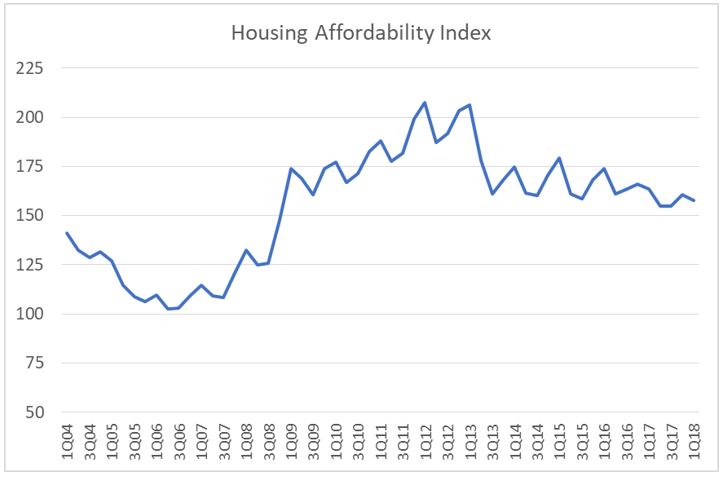 Source: National Association of Realtors
Housing is not as critical to the health of the economy as it was prior to the Financial Crisis, but it remains very important nonetheless. High costs of homeownership can stress the financial well-being of homeowners while also creating societal divisions between homeowners and those who have effectively been priced out of the market. The Federal Reserve, through monetary policy, has succeeded in driving housing prices to back into record territory (prior to adjustments for inflation) following a very nasty correction. But their actions don’t come without consequences. The delicate balancing act ahead is fraught with peril. So while it’s unlikely that long-term investors need to be overly concerned at this point about a slowdown in housing, we do think this is seminal economic data that provides us valuable clues about the underlying strength of the economy and its ability to withstand interest-rate increases. Our suspicion is that continued increases in interest rates will not be well tolerated in the housing market or the economy at large. Such are the consequences of an economy so heavily dependent on debt.
In our June 27 Market Commentary, we posited that based on CBO and Fed projections, the expected acceleration in economic growth resulting from fiscal stimulus (tax cuts, spending increases) will not be much more (if any more) than the expected increase in budget deficits in the coming years. In other words, we won’t be getting a multiplier effect from the fiscal stimulus.   My friend Greg Valliere discussed this same issue in a piece he sent out yesterday. I thought I would include some excerpts:
“BOOMING ECONOMIC GROWTH has not been sufficient to lower the budget deficit – in fact, the deficit and Treasury borrowing are headed sharply higher, and virtually no one in Washington seems to care.”
“PROPONENTS OF STEEP TAX CUTS have asserted that they would boost revenues, but thus far this has not occurred, with corporate tax payments down by a third this year. Treasury is considering a capital gains tax cut that would index the rate to inflation, with a potential revenue loss of another $20 billion a year.”
“WHO’S TO BLAME FOR THIS? Plenty of blame to go around – Democrats are thrilled to get extra spending in the Senate appropriations bills; Republicans have abandoned any pretense of deficit hawkishness; the Trump Administration will spend billions more to bail out victims of trade tariffs. And no one dares to take a serious look at the most obvious cause of deficits – entitlement spending, the most sacred of all cows.”
“BOTTOM LINE: There’s an insatiable demand for Treasury paper, domestically and from abroad. That should persist – until it doesn’t. We’re in uncharted waters, there have never been such consistently high deficits in a period of peace and prosperity, when red ink should be declining.”
“WILL THIS DRIVE INTEREST RATES HIGHER? Perhaps, but the correlation between deficits and interest rates is not overwhelming. Let’s just say that this could be one of several factors – including a whiff of inflation and red-hot economic growth – that could put upward pressure on rates. The bigger concern, long-term, is that borrowing costs eventually will crowd out government spending on virtually everything. Maybe that’s the plan.”