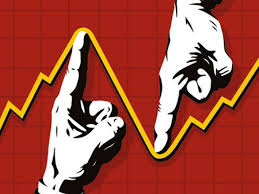 In 2017, the S&P 500 produced a total return of nearly 22% with historically low volatility and twelve consecutive months of positive returns. The market shrugged off all bad news and broke all-time highs with nary a pullback, much less a correction. As we rung in the new year, we got more of the same. January, 2018 brought an additional 5.7% total return for investors in the index. Money flowed into US equities with reckless abandon. Some investors seemed to believe the markets would march upwards forever.

February was a rude awakening for many people. Risk assessment isn’t just jargon for how high your return will be; it turns out that investing in stocks actually entails a real risk of losses! One of my clients had a saying he repeated when people were surprised by a return to historical norms. “Santayana was wrong – it’s not that people who don’t know history are doomed to repeat it. People who don’t live the history are doomed to repeat it.” He may have had a point, and perhaps recent history in the equity markets has been so good that even those who have lived through bear markets may have forgotten.

To be sure, 2017 was an abnormal year. The average daily move of the S&P 500 in 2017 was just 0.3%. In February and March of this year, the average daily move surged to an abnormally high 1.1%. Every month in 2017 was positive, and we have just finished two consecutive down months. The chart below shows the abrupt and glaring change in fortunes for investors in US stocks. Is this the start of a new long-term trend? 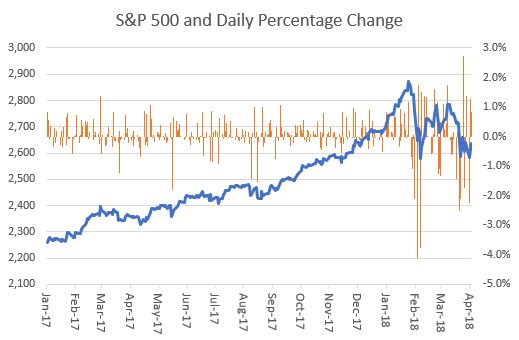 The return of volatility doesn’t necessarily mean that the bull market is over or that equities are bad investments. Over the last two months, the markets have been reassessing risks, and that is healthy.  Among the new risks are a new direction for monetary policy at the Fed, which is no longer suppressing interest rates to levels that force consideration of riskier investments.  There are also fears of higher inflation and interest rates, which for several years were among the primary justifications for high stock valuations.  And then there are the possible escalations of trade wars, which could raise prices for consumers and hinder exports and profitability for US corporations.  Lastly, confidence has been shaken by a perception of chaos in Washington relating to the Mueller investigation and the constant churn of personnel at the highest levels of the federal government.
The markets are adjusting to new upside risks as well. Upside risks are positive developments that may occur that cause stocks to go up more than expected.  The “risk” being that you are underinvested and do not take full advantage of those positive developments.   Among those upside risks are greater-than-expected earnings growth, improvements in corporate investment and productivity, successful trade negotiations improving the markets for US goods and services, and a resolution to the crisis with North Korea.

With all of the uncertainty, upside and downside, markets will react; they will have larger moves as price discovery incorporates new risks. Markets are not eternal money-making machines, but discounting engines.  When we buy a stock we are buying a share of the future earnings of the company.  The more uncertainty to the future, the more risk we assume.

So what is the new normal?  For the foreseeable future, anyway, it probably includes much greater volatility than we saw in 2017.  We will see more days with large point swings as investors and traders sift through the noise coming out of Washington, New York, Pyongyang, Damascus, Tehran, Moscow and Beijing. There will be days during which panic will set in on news that is superficial, and other days during which impactful news developments don’t receive their due consideration. My friend Jack Bouroudjian says that the low-hanging fruit has been harvested, and the days of “dumb-money” investing are over.  That isn’t a disparaging comment, but with equities rising relentlessly across the board as they did in 2017, it was easy to look smart. The environment now has changed.

Above all, in times of volatility (which, again, is normal), be sure of the risks you are assuming and that you are comfortable with those risks. Don’t let emotion, either euphoria or despair, lead you astray. We firmly believe dogged research and discipline will pay off in the long run. You’ve worked hard for your money – be smart about how you invest.