A lot has been written about how lazy, impatient and entitled Millennials supposedly are.   It is said that this generation, now roughly between the ages of 16 and 35, was reared with the expectation that every kid receives a trophy, regardless of effort or performance.  This coddling by their baby-boomer parents has resulted in a large segment of the population with a collective case of narcissism.    What these youths need, say many older folks who endured far greater hardships, is a lesson from the School of Hard Knocks.  Only the experience of real-life trials, tribulations and, yes, failures, will get these kids to appreciate how easy they have it.

But is it possible that rather than entitlement and snobbery the Millennials are simply acting out in response to a highly uncertain future?  Could it be that rather than simply spoiled rotten these youths are victims of some very poor circumstances brought on by factors outside their control?   A June 30, 2016, article by Sarah Kendzior had this to say:  “But if anything holds this tenuously defined generation together, it is a lack of options. Americans who have lived much of their adult lives in the aftermath of the Great Recession have lower incomes, less mobility, and greater financial dependence on older relatives than any other generation in modern history.  Many millennials do not have a lot of choice. They are merely reacting to lost opportunity.”

Regardless of which camp you are in, there are clearly at least four major factors that will weigh on Millennials’ financial condition in the years to come:

As usual, we decided to run some numbers to see if we could get a (very) rough idea as to how these headwinds will affect younger Americans.  We decided to analyze the case of a hypothetical recent college graduate.  This newly minted grad, who we will call Tom, was able to find a job at the average starting salary for 2017 college graduates of $49,785 (according to a study by the Hay Group division at Korn Ferry).  We assume that his income will grow at 3% per year over the next 40 years until retirement.  He has the average amount of student debt for a 2017 college graduate of $37,172 (obtained from Studentloanhero.com), which will be paid over 10 years and accrues interest at a rate of 4.45% (the current rate on new student loans obtained from Department of Education web site).  He has not yet begun to save for retirement, but he will do so at a rate of 8% of his gross income after subtracting his loan payments and his portion of health insurance premiums (we assume his employer covers some of the cost).  We assume his retirement account will earn an annual return of 7%, which is our estimate for long-term equity returns.  Tom’s portion of his health insurance premium is $200 per month, and we assume it grows at an annual rate of 5% (well below recent growth rates).  Upon learning of his job offer, Tom decided to buy a house at the current median price for an existing home sale, which is $244,800 (according to the National Association of Realtors).  For simplicity, let’s assume he financed 100% of the purchase price through the combination of a 30-year fixed-rate FHA loan, which covers 96.5% of the cost, and a loan from his parents for the down payment.  We will assume the interest rate for these loans is 4% – roughly the current mortgage rate.  Finally, and for simplicity, we are assuming Tom incurs no income taxes.

All of the above assumptions were used to derive Scenario 1 in the charts below.  For Scenario 2, we made changes to just four assumptions.  All other assumptions remained the same.  Here are the changes: 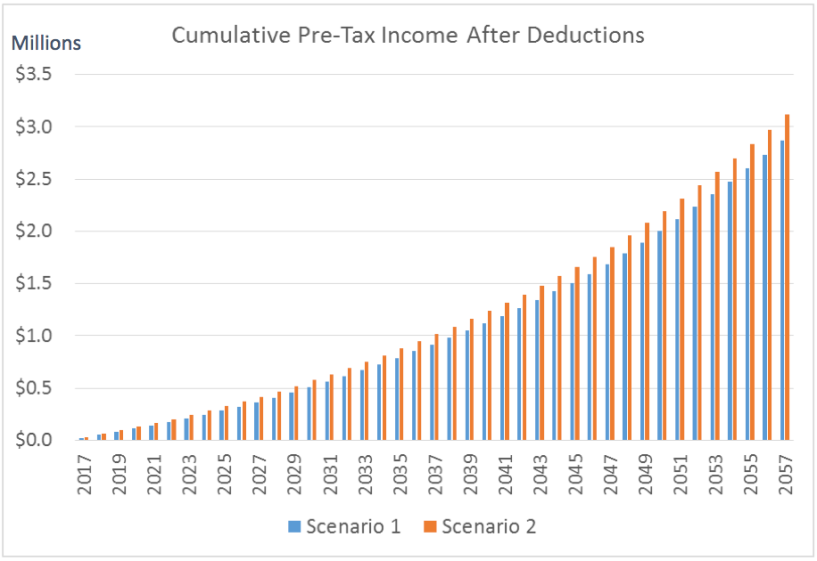 As you can see from the chart above, Tom would earn significantly higher pre-tax income under Scenario 2.  The difference, which amounts to about $250,000 in cumulative earning power over 40 years, translates to over $6,000 per year.  And before you go thinking that Tom’s expected earning power seems pretty good in either scenario, remember that we are not adjusting for income taxes or inflation.  The cumulative figures under both scenarios would be dramatically lower if we take those factors into consideration.

But the bigger issue by far is the expected growth in Tom’s retirement portfolio.  In the chart below you will see that Tom’s retirement portfolio will grow to about $1.4 million under scenario 2 compared to just about $900,000 under scenario 1.  The overwhelming majority of the difference can be accounted for by the seemingly modest increase in annual return assumption from 7.0% to 8.5%.  This shows the detrimental effect that high stock-market valuations can have on those who have yet to begin saving for retirement in earnest.  The higher the starting valuations, the lower the expected returns.  And once again, before you go thinking that even $900,000 is a good-sized nest egg, remember that these savings must be taxed when withdrawn.  In addition, the impact of inflation will dramatically reduce the purchasing power of $900,000 in 40 years.  If we assume a 2% annual inflation rate, the present value of the Scenario 1 retirement portfolio goes from $900,000 to just $411,000.  And even that will be taxed (at likely a higher rate in the future)! 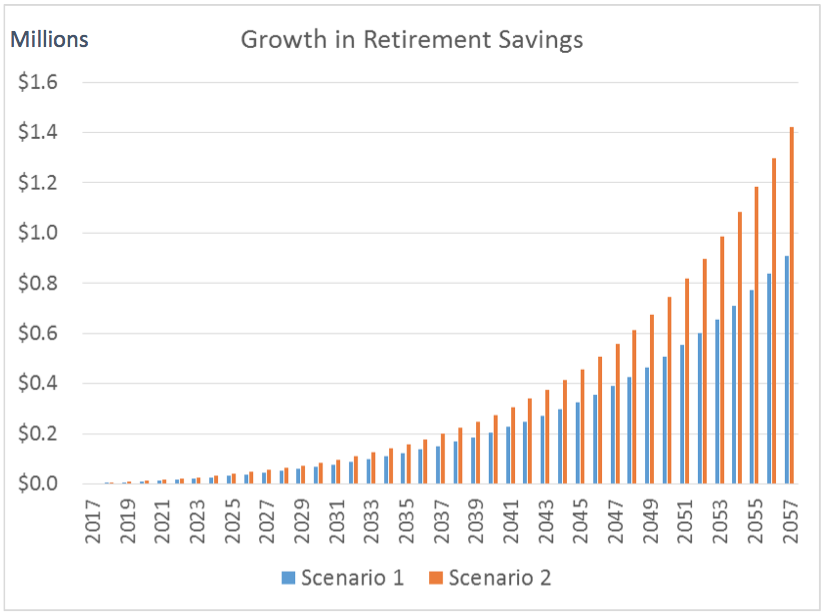 In generations past, individuals who did all the “right things” – including going to college, keeping a stable job, buying a house, saving for retirement and investing those savings wisely – would have expected to get ahead and be able to retire comfortably at a reasonable age.  These same prospective retirees may have also been able to count on Social Security, Medicare and a bit of inheritance from their thrifty parents.  Unfortunately for today’s Millennials, this outcome might not always transpire.  Due to circumstances largely beyond their control, many Millennials might not only fall short with regard to retirement savings, but they might also face higher tax rates, lower entitlement benefits, and lower inheritance from a generation that, generally speaking, has been profligate in its spending.  So who is to blame for all this?

It seems clear to me that most of the responsibility for the Millennials’ dire financial outlook lies squarely with various government entities.  Unrestrained growth in the cost of college tuition (and therefore student debt) has resulted from several factors, including low interest rates, near limitless access to government-backed student loans, and poor government oversight and accountability on education providers.  Soaring home prices are the direct result of both the Fed’s suppression of interest rates and the government’s decision to fill a gaping funding gap following the financial crisis (Freddie Mac, Fannie Mae and the FHA have funded or guaranteed the vast majority of mortgage loans since the housing market collapse).  Dramatic inflation in health care costs is the result of failure on multiple levels of government.  And perhaps most important to the Millennials’ financial future, the current high level of stock prices (and valuations) is the direct result of artificially low interest rates and the Fed’s concerted effort to force investors into risky assets as a means of sparking economic growth.  Lastly, fiscal irresponsibility at the federal level has resulted in huge federal debt loads, a huge expected increase in spending on entitlements, and the prospect of much higher tax rates in the future. So the next time you hear a Millennial complaining about something, remember that poor governance has given them many reasons to complain.  Unless and until something changes in dramatic fashion, Millennials are likely to have meaningfully lower living standards than us older folks.

We at Farr, Miller & Washington closely follow the health of the US consumer because consumers are so very important to our economy.  Unfortunately, our young adults, in particular, are not in good shape. They have too much debt, will have trouble buying their first home, and will have to save more than expected as a result of weak income growth and depressed investment returns. Why is all this important?  Because the poor financial condition of a large cohort of consumers could keep a lid on the pace of economic growth in the years to come.