The dollar has spiked rather dramatically over the past several weeks on prospects of better economic growth and higher interest rates.  In fact, on a trade-weighted basis the dollar has eclipsed its highs from January of this year and is now hovering around levels last seen in early 2002.  While it’s generally a positive sign when a currency strengthens, dramatic movements in short periods of time can have serious repercussions for trade.  A rising dollar makes US exports less competitive relative to products and services sold by competitors based in countries with weakening currencies.  Therefore, dollar strength can act as a strong headwind for those US companies heavily dependent on exports.  And since 40%-50% (estimates vary) of S&P 500 revenues are derived outside the US, a rapidly rising dollar is no trivial matter as it relates to corporate sales and profitability.  US consumers, on the other hand, generally benefit from dollar strength as they can use their stronger dollars to buy more goods and services imported from other countries.  But then again, the consumer’s gain comes at the expense of US companies that are losing US wallet share to foreign competitors.

We generally hear our politicians say that they are supportive of a strong dollar.  However, an appreciating dollar can cause problems for policymakers and central bankers as well as US corporations.  Why?  Because the size of our economy is measured by the following formula:

The final component in the equation, Net Exports of Goods & Services, is derived by subtracting imports from exports.  Because we always import more than we export, this component of GDP is always negative.  So, as we discussed above, we can expect imports to increase and exports to decrease in a rising-dollar environment.  If we hold all else equal, the rise in imports and drop in exports caused by an appreciating dollar is a drag on economic growth.  How much of a drag?  Well, since 1995 net exports have subtracted anywhere from 0.8% to 5.6% from GDP (on a quarterly basis), with an average of 3.4%.  This compares to about 3.1% in the most recent quarter (3Q16).  With the trade-weighted dollar at 14-year highs, net exports are currently subtracting just 3.1% from GDP – below the 20-year average of 3.4%.  You would think that the drag would be much greater given the huge dollar appreciation over the past couple of years.  Seems like something has to give, right?

We decided to go back and try to quantify the possible effects on GDP from the recent spike in the value of the dollar.  The last time the trade-weighted dollar index was this high (approaching 130) in 2001-2002, the trade deficit was subtracting 4.0%-5.0% from GDP.  In the chart below, we went back 20 years and tracked the quarterly average trade-weighted dollar against the ratio of trade deficit to GDP.  We also ran a regression to see how GDP growth would be affected if the trade-weighted dollar held current levels for the remainder of the fourth quarter.  Our regression analysis told us that the dollar’s recent strength could be a drag of 0.50%-0.90% of GDP in the fourth quarter.  It is hard to see how we hit some of the optimistic estimates out there (some as high as 3.5%-4.0% for the 4Q) if trade is causing such a nasty drag.

Source: The Bureau of Economic Analysis and The Federal Reserve
It should also be acknowledged that the effect on net exports from changes in the dollar seems to lag.  As such, we may not see the full negative impact in the fourth quarter.  In the second chart below, we put a three quarter lag on the historical deficit data.  It turns out that there was a much better correlation (R-squared of 42%) with a three quarter lag.  In other words, it seems to take (on average) three quarters for changes in the value of the dollar to affect the ratio of trade deficit to GDP.  As such, we suspect that if the dollar maintains current levels or rises further there will be a sizeable drag on GDP in 2017. 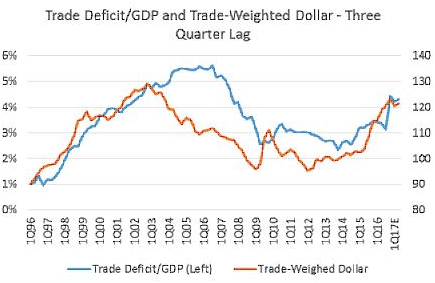 Source: The Bureau of Economic Analysis and The Federal Reserve
So what is our message?  Sudden and dramatic strength in the dollar is not without its risks, and the markets appear to be ignoring these risks (for the most part).  Aside from corporate profits and GDP, the bigger immediate risk is that of capital flight from the emerging markets.  We saw this late last year when the Fed had been forecasting as many as four interest-rate hikes in 2016.  The problem is that there has been a massive amount of dollar-denominated debt issued by entities in emerging markets over the past several years.  If money starts pouring out of those regions and into the US, those entities will find it that much harder to pay back their debts.  In addition, interest rates will rise in those regions, compounding the difficulties in servicing and refinancing that debt.  These pressures, at worst, could lead to a financial crisis.  At best, we can expect extended economic weakness in the emerging market countries.  Secondly, dramatic dollar appreciation can lead to disinflationary effects in the US as importers can lower prices in dollar terms and still maintain profitability.  While this is not as big an issue as it was in years past, the Fed is still trying to spur inflation through monetary policy.

As noted, sustained dollar strength could also have a longer-term effect on US economic growth and corporate profits.  At present, economists and stock analysts don’t appear to fully appreciate the impact that the surge in the dollar could have.  But the risks are clear and present, and this is a major reason why we do not believe the US economy can dramatically “decouple” from the rest of the world.  Like it or not, we’re in a global economy and can’t go it alone.