As we approach the start of a new year, it appears as though stocks will end 2015 roughly flat after significant volatility throughout the year. Consider us among the grateful for nothing worse than the “breather” that stock prices have taken. In the chart below we show that 2015 could still be the 7th consecutive year of positive returns (including dividends) for the S&P 500. And despite two very ugly bear markets, the S&P 500 has produced a total return of over 8% annually for the past 20 years. Not too bad if you ask me. 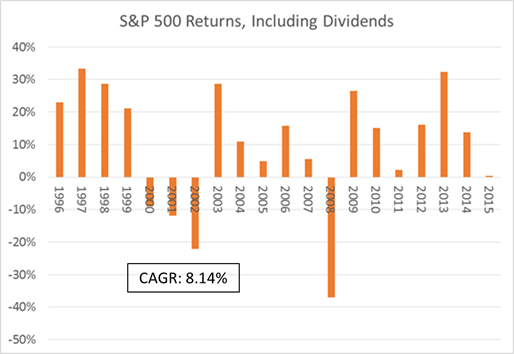 And so, there is much to be thankful for this holiday season (not the least of which should be the Redskins winning the NFC East). Next year promises to bring new challenges, but also new opportunities. At Farr, Miller & Washington, we think it’s a fool’s errand to try and time the markets. Had investors sold stocks based on their fears over the past several years, they would have lost out on huge gains. And while the challenges now seem greater than at almost any other time in the recent past, we will find our way through. Just like we always have.