The Federal Reserve has fueled financial bubbles and exacerbated economic problems before, and they are doing it now. A warped lens can create as much myopia as it fixes. Relying on partial data can be misleading.

In the past 15 years, we have seen what can happen when the Fed underestimates the risks of rising asset prices and maintains “accommodative” monetary conditions for too long. In 2000, the bursting of the technology-stock bubble led to the evaporation of trillions in wealth, ultimately causing (together with the events of 9/11) a recession. In response to that recession, then-Chairman Greenspan reduced the Fed Funds rate to below 2% for three years. Greenspan’s “accommodative” monetary policy and a corresponding weakening in lending standards (which also falls under the Fed’s supervisory duties) led directly to huge appreciation in housing prices. When the housing bubble burst, the Fed’s initial efforts to rescue the economy (which we applauded) have spanned over seven years. During that time, which continues, the S&P 500 has increased well over 200% while housing prices have rebound some 25% off their lows.

Below we show housing and stock prices (as measured by the Case Shiller US Home Price Index and the S&P 500, each indexed to December, 1995 levels) as well as the Fed’s target Fed Funds rate over the past 20 years. It is easy to see the correlations.

So where has the Fed erred? The Fed’s biggest policy mistakes over the past 25 years were caused by the failure to adequately account for asset prices in its assessment of overall consumer inflation. Specifically, there is nothing in the Fed’s preferred measures of consumer inflation (CPI, ECI, and PCE) to account for: 1) the actual costs of buying a home; and 2) the costs of saving for retirement. Had the Fed adequately recognized the rising costs of buying a home and saving for retirement, the central bank would likely have been much more judicious in the application of its monetary policy.

We suggest calculating a more accurate reflection of consumer prices over the past 20 years. I will concede that my analysis is rough, but accurate in the spirit of its message. That said, the analysis below should serve as a good starting point in covering some very important topics.

The Fed’s Concept of Inflation
The Fed uses a variety of metrics to gauge and track consumer inflation, the most obvious of which are the Consumer Price Index (CPI), the Personal Consumption Expenditures (PCE) deflator, and the Employment Cost Index (ECI). Each of these metrics has its own merits, with the CPI being the one most known to the public. I have chosen to use the CPI as the Fed’s preferred metric because it is widely known and the data is most comprehensive. I fully recognize that the Fed places a bit more weight on the PCE deflator, but the core PCE tracks the CPI (ex food & energy) very closely. The important point is that none of the metrics used by the Fed include adjustments for asset prices, which is the crux of my analysis.

The Cost of Home Ownership
The cost of “shelter” has accounted for over 30% of the total CPI index since 1998, and slightly below 30% in years prior. Therefore, this cost is of paramount importance to the index itself. However, the Bureau of Labor Statistics (BLS) does not incorporate housing prices as part of the cost of “shelter”. Why? Because the BLS considers houses and home improvements to be investments rather than living expenses.

So, in place of housing prices, the lion’s share of the cost of shelter in the CPI is included as “Rent of Primary Residence” and “Owners’ Equivalent Rent of Residences”. Without getting into specifics (which can be found here), the CPI’s “shelter” component has consistently been much less volatile than housing prices over the past 20 years. The graph below shows the huge disparity.

So, our first adjustment to CPI is an effort to adjust for the actual cost of owning a home rather than the cost of renting. We wanted to capture the fact that most Americans own their homes. While the homeownership rate has declined over the past few years, some 64% of households still own their homes. We think that the cost of buying those homes should be represented. Therefore, our adjusted CPI uses a weighted average of the CPI’s “Rent of Primary Residence” and the Case Shiller US Housing Price Index for the cost of shelter. The weights for each component of “shelter” inflation were determined by the Home Ownership rate in each year.

As such, we think the various inflation metrics need to account for the fact that: 1) at any given age bracket, the large majority of consumers remain well underprepared for retirement; 2) today’s high prices for stocks and low yields on bonds will likely lead to below-average returns on these assets in the future; and 3) lower expected returns in the future will mean that underprepared savers will need to set aside more for retirement, effectively raising the cost of saving for retirement. In order to account for those rising costs, we make an adjustment for stock and bond prices.

To include financial assets in our adjusted CPI, we simply included annual changes in the S&P 500 index and the Barclay’s Capital US Bond Composite index. The S&P 500 and Barclay’s bond indices received arbitrary weightings of 10% and 5%, respectively, in each year. Making this adjustment ensures that the cost of saving for retirement is accounted for as asset prices fluctuate. Again, as asset prices increase (decrease), the cost of saving for retirement increases (decreases) due to: 1) the fact that the overwhelming amount of Americans remain underinvested; and 2) large increases (decreases) in stock and bond prices will translate to lower (higher) expected returns in the future and the need to set aside more (less) money to reach retirement goals.

Adjusted CPI
In the table below, we show what the weightings would look like for our Adjusted CPI in 2014. 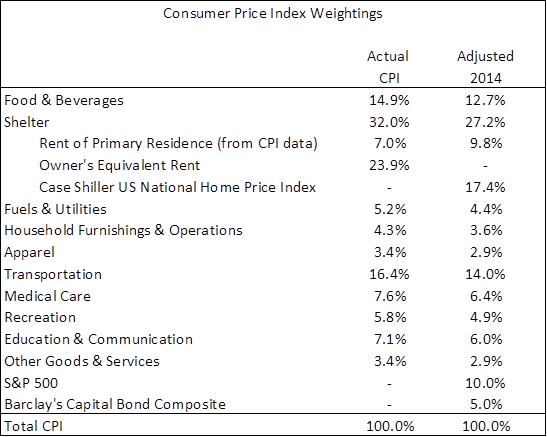 Below we show the growth in actual CPI compared to the growth in our “Adjusted CPI”. It should be immediately apparent that Adjusted CPI was running very hot prior to the bursting of the tech bubble in 2000-2001 as well as prior to the financial crisis (and bursting of the housing bubble) in 2008-2009. Had the Fed been formulating monetary policy using our Adjusted CPI, they may have acted more quickly to contain speculation in the asset markets. And had they acted sooner, the severity of the recessions in 2001 and 2008-2009 may have been much more limited. But perhaps more importantly, we may have avoided the boom-and-bust cycle in asset prices that has been going on for over 20 years. 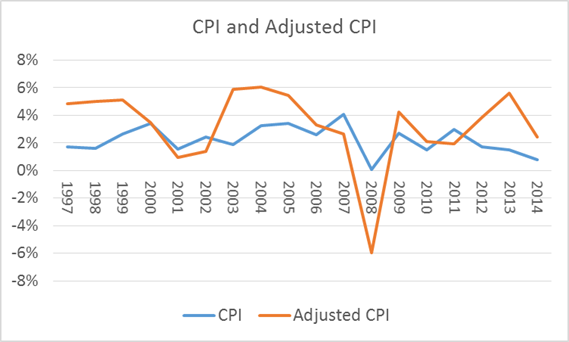 The Fed cannot eliminate business cycles, and it should stop attempting to fine-tuning every aspect of the economy. When the Fed uses its blunt instruments to affect economic growth, there are ancillary effects. In each case over the past 20 years, easy money has found its way into the asset markets. The Fed’s failure to respond to the asset markets has caused big problems for the economy at large.

Is the Fed behind the curve yet again? It sure seems like it. Our Adjusted CPI has been running much hotter than the actual CPI for the past three years (2014 inflation rates were negatively affected by a huge drop in energy prices). This disparity reflects the rapid rise in stock, bond and housing prices. Asset prices are off to another good start in 2015 even though Janet Yellen has twice warned about lofty stock valuations. Will Janet back up her rhetoric with some actions and quell the “irrational exuberance”, or has she lost control of the capital markets? It remains to be seen, but this is no time for investors to get aggressive. Stay defensive and invested in high-quality investments!