The bond market has sold off rather dramatically since mid-year when the Fed signaled its intent to begin the tapering process. The yield on the 10-year Treasury bond currently sits at about 3.0%, up from a low of about 1.4% in mid-2012. It appears that 3.0% is a key level of support for bonds. The obvious factor driving bond yields higher (and prices lower) is the impending end to the Fed’s massive program of Quantitative Easing (QE), which has injected over $3 trillion into the system through direct purchases of long-term Treasury bonds and mortgage-backed securities (MBS). But bond bears will also point to improving economic data of late, especially with regard to employment and the housing market, as a factor driving bond yields higher. A better economy means improving demand for everything from goods and services to loans. As aggregate demand improves, inflation – the mortal enemy of the bond investor – could rear its ugly head. This is the narrative the bond bears will spin. 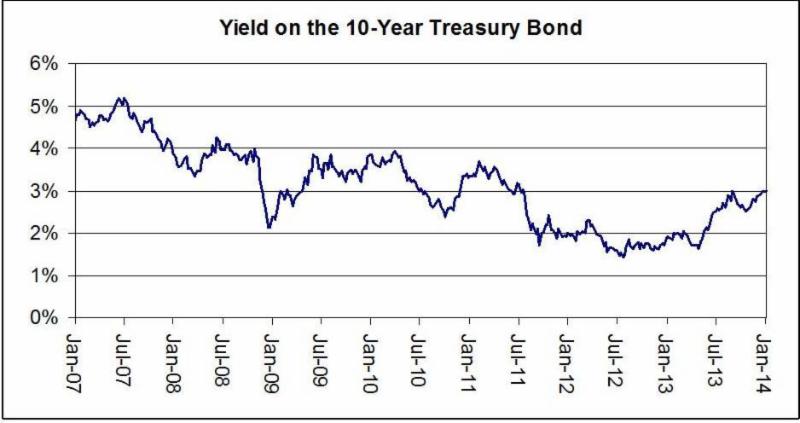 Our view is a little less optimistic with regard to the intermediate-term pace of economic growth. While it is notoriously difficult to predict interest rates with any degree of accuracy, our belief is that yields significantly above 3% will be hard for this sluggish economy to support over the intermediate term. Undoubtedly, yields could rise above (and possibly significantly above) the 3.0% level over the near term. But we still see too many impediments to the kind of economic growth necessary to drive interest rates significantly higher from here. First, in our view, is the fact that this economy has become highly dependent on low interest rates, most notably to support asset prices such as stocks and housing. Any significant increase in rates could cause renewed turmoil in the housing market or a significant correction in stocks. This scenario would surely affect the economy at large.

Secondly, consumers have become highly dependent on low interest rates for both lower debt-service burdens (the Fed’s Debt Service Ratio, or DSR, is currently at a multi-decade low) as well their willingness to borrow and spend on a continuing basis. If interest rates were to rise sharply from here, the cost of servicing a mountain of consumer debt would slowly reset higher and the recent expansion in consumer credit may stop in its tracks. Is there any doubt that the amount of cars or dishwashers or flat-screen TVs (these are the Fed’s “durable goods”, which are typically bought using credit) would slow if credit were to suddenly become dramatically more expensive? Wouldn’t the recent massive expansion in student loans slow as well?

A third factor acting as an impediment to outsized economic growth is that higher interest rates would make it incrementally more difficult to fund our federal government deficits and mountain of federal government debt. Treasury bonds are constantly maturing and must be refinanced. As rates rise, the cost to service that debt could trend sharply higher as well, leading to even higher deficits. As the amount of government debt issued rises, this borrowing could crowd out private investment and slow the pace of economic recovery.

And finally, higher interest rates might encourage the consumer, whose savings rates have declined over the past few years, to save more rather than borrowing and spending. We have long held that the overwhelming majority of the benefits of this economic recovery have gone to the “one-percenters.” The middle class has had to resort to lower savings rates to fund living expenses. As rates rise, some consumers may find it incrementally more desirable to increase savings rather than further imperil their retirement plans.

Unfortunately, the Fed’s aggressive monetary policy is a double-edge sword, and we have yet to experience the drawbacks of such policy. The Fed opted for a plan designed to avoid intense short-term pain but, in the process, the Fed prolonged that pain. Now, QE has led to an environment whereby the economy simply cannot support higher interest rates. Said another way, there is a cap on the rate of economic recovery we can expect due to the inability to digest higher rates. This is the problem with encouraging debt as a solution to the problem of too much debt.

It should also be noted that there is scant evidence of an increase in inflation that might trigger a dramatic spike in interest rates. In fact, Fed members and investors alike have been more worried about disinflation, or a decrease in the growth rate of prices. Disinflation was a factor cited by the Fed to justify the deferral of tapering at its September meeting. And it continues to be a concern among certain Fed members today. The reality is that companies are unable to gain much pricing power in an environment of high unemployment, low capacity utilization and low income growth. The only real evidence of inflation we are seeing, which is a big issue for us but apparently not at all for the Fed, is in asset prices. But while very risky, in our opinion, a policy of driving asset prices higher through lower interest rates is not likely to result in more widespread inflationary pressures in the economy.

The bottom line is that we have no idea where interest rates might head over the near term. Could the yield on the 10-year Treasury be 4% a year from now? Of course. However, we think a 4% yield on the 10-year would represent a real headwind with regard to this nascent recovery. The evidence we are seeing suggests that interest rate increases should be held in check over the intermediate term due to a long list of issues inhibiting the pace of economic recovery. This leads us to the conclusion that bonds may be starting to look a bit more attractive as an asset class.