We have mentioned many times in our Market Commentaries that historically high corporate profit margins are likely to limit earnings growth in the future. This week, we revisit the topic in an effort to provide more color on the subject. A recent Wall Street Journal article entitled “Lofty Profit Margins Hint at Pain to Come for Stocks” did an effective job of describing the uphill battle investors face due to the high level of profit margins. The article included the chart below, which shows that at today’s level of 9.3%, corporate margins are well above the historical average of 5.9% since 1952. The article goes on to discuss how profit margins have always tended to revert to the long-term average, which simply means that margins will eventually fall if they are above the long-term average, and they will eventually rise if they are below the long-term average. We agree with all that – so far, so good. But why have margins risen so high, and what could cause them to fall in the future? 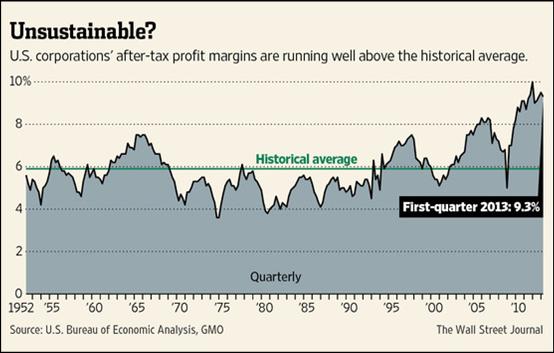 The Wall Street Journal article referenced above did an effective job of describing the issue, but it did an incomplete job in discussing the drivers of today’s historically high level of profit margins. The article explains, correctly, that lower taxes and falling interest rates are two of the factors contributing to high profit margins. Perhaps the largest factor explaining the reduced level of taxes is the fact that many US multinational corporations are generating an increasing share of sales and income in countries with lower tax rates. With regard to interest rates, it is only natural that any responsible corporate CFO has used the low interest-rate environment to refinance its debt and lock in very low interest rates for years into the future. These two factors have been clear contributors to profit margin growth in recent years, and it would appear that these sources of margin growth could have some staying power. But these aren’t the only reasons we are seeing near-record margins.

Other factors contributing to high corporate margins are today’s low rates of capacity utilization and high rates of unemployment. While capacity utilization has rebounded to 77.6 in July from a low of 66.9 in June 2009, the metric is still below the long-term average of 80.6 (since 1980). Companies are carrying excess levels of idle factory capacity, which means they can ramp up production without having to incur the costs of adding new capacity. With regard to labor costs, companies see no need to increase wages while there are still millions of workers looking for jobs. As a direct result of high unemployment, wage growth has not kept up with the rate of inflation over the past few years. Another recent Wall Street Journal article (“Stagnant Wages Are Crimping Economic Growth”) said that “Four years into the economic recovery, U.S. workers’ pay still isn’t even keeping up with inflation. The average hourly pay for a nongovernment, non-supervisory worker, adjusted for price increases, declined to $8.77 last month from $8.85 at the end of the recession in June 2009, Labor Department data show.” So clearly these two factors, low capacity utilization and high unemployment, have kept a lid on corporate expenses over the past few years. But what about the revenue side of the equation?

Perhaps the best explanation for today’s high profit margins is much more intuitive. In an excellent recent note entitled “Baked in the Cake”, John Hussman of the Hussman Funds states that “Corporate profits move tightly and inversely to the combined sum of household and government savings.” In other words, profit margins are so high right now because the government has been running record budget deficits and consumers have been saving a much smaller percentage of income in recent years. The debt-fueled spending of the past several years has allowed companies to “maintain revenues despite the fact that workers (and the government) are not, in aggregate, earning sufficient income to support that consumption.” If you believe, as we do, that the level of consumer and government spending is unsustainable, it makes sense to question the sustainability of corporate revenue, profits and margins as well.

P/E ratios that incorporate today’s high corporate profit margins may be less useful than they have been in the past. In our view, we cannot rely upon the sustainability of high profit margins for several years into the future. In the same research note cited above, John Hussman makes a very good point with regard to investors’ over-dependence on the ratio of price to forward earnings. Hussman says:

The issue of high corporate profit margins seems to be gaining increased attention in recent months. Notwithstanding the Fed’s efforts to boost asset prices and force investors into riskier assets, we believe that valuation levels have become somewhat stretched. Those investors placing a heavy weight on price-to-earnings ratios that assume continued high profit margins are being overly simplistic. Indeed, Fed Chairman Ben Bernanke is one of those “investors.” For our part, we remain invested but defensive. We have been through periods like this before, and we don’t believe anyone can predict with any degree of certainty where the market is heading over the short term. Like Warren Buffet, we are staying invested and will be looking for additional opportunities as the market presents them.