There has been a lot of talk in the media (including from me) about the effects, both positive and negative, of the Fed’s aggressive monetary easing programs. We are in the camp that believes Fed’s support was unquestionably needed during the throes of the crisis in order to avoid a complete financial collapse. However, the continued aggressive monetary support from the Fed has led to some serious concerns, at least on our part. Our major concerns, as we have articulated in past market commentaries, are that 1) the Fed’s actions can cause commodity price inflation, which can be counterproductive to the recovery; 2) the Fed’s policies can cause asset price inflation, leading to the threat of asset bubbles; and 3) both the economy and capital markets have become heavily dependent on continued aggressive Fed actions, potentially creating a problem of moral hazard (particularly in the stock market). Our overriding fear is that the Fed will find it very difficult to extricate itself from the situation of dependence it has created. And while stabilization in housing prices and huge gains in stocks feel good at the moment, this could all change very quickly. The Fed cannot simply manipulate interest rates and grow its balance sheet indefinitely. What is the exit strategy? When does it begin?

In an effort to better understand the effects of the Fed’s monetary policy, we constructed a timeline of major Fed developments and tracked key economic metrics. We tracked five metrics or indices: the Dollar Index, the price of oil, a commodity index, the S&P 500, and the yield on the 10-year Treasury note. Our starting point was the announcement date of the Fed’s first quantitative easing program (”QE1″), and our ending point was late February of this year. The rather busy chart below shows the results of our analysis. The boxed annotations represent key developments at the Fed. The shaded gray areas on the chart represent periods during which the Fed had withdrawn QE support only to return later with more QE. Take a minute to review the chart, and we will try to draw some conclusions below. 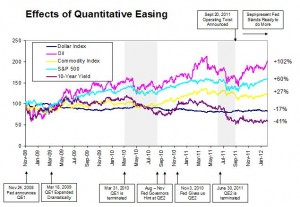 Some conclusions seem pretty clear from the table (even though correlation is not necessarily causality):

1) The ballooning of the Fed’s balance sheet has contributed to a 17% decline in the value of the dollar versus a basket of other currencies;
2) The QE programs seem to have, at the very least, contributed to the sharp increases in commodity prices;
3) QE has been very kind to stock investors, and stocks performed far better during periods of QE support as compared to during periods which the Fed had withdrawn its QE support (gray shaded areas);
4) The sharp drop in yield on the 10-year Treasury note (down 41% during the measurement period, which is the objective of QE) occurred entirely during periods of withdrawn QE support.

The first three conclusions are consistent with our worries articulated above – the Fed’s programs seem to have at least contributed to both commodity and asset price inflation, and the stock market, at least, seems to be highly dependent on Fed support. The last conclusion, however, is potentially more worrisome. The fact that interest rates plummeted during periods of withdrawn QE support may be telling us that the economy is not strong enough to stand on its own two feet. Given that many people regard the bond market as better “tea leaves” than the stock market, it should come as no surprise that Bernanke remains fully committed to his aggressive monetary stimulus initiatives.
The problem is that there is no way to definitively know whether it is yet safe to take of the training wheels. Each time the Fed has withdrawn to date, the economic outlook appeared to deteriorate significantly. This has left Bernanke in a state of fear, believing he needs to stay fully engaged. However, it is quite possible that another factor was responsible. The crisis in Europe created an inordinate amount of uncertainty and pessimism during the summer of last year. To the extent that the liquidity crisis has eased, might this provide Bernanke with an opportunity to reduce the pressure on the accelerator?

In my opinion, we are rapidly approaching the moment whereby the risks of continued monetary support may outweigh the benefits. Several Fed governors, including Charlie Plosser, Jeffrey Lacker and Richard Fisher, seem to already agree with me. These Fed officials seem to understand that the longer we wait, the harder it will be to unwind. We hope that Bernanke will soon catch on as well.

* The “Dollar Index” is the PowerShares DB US Dollar Index Bullish Fund, an exchange-traded fund designed to replicate being long the US Dollar again the following currencies: Euro, Japanese Yen, British Pound, Canadian Dollar, Swedish Krona, and Swiss Franc.
** For “Oil” we used the WTI Cushing Crude Oil Spot Price as reported on Bloomberg Financial.
*** The “Commodity Index” is the PowerShares DB Commodity Index Tracking Fund, an investment fund with the objective to reflect the performance of the DBIQ Optimum Yield Diversified Commodity Index Excess. The Fund invests in commodities such as Light, Sweet Crude Oil, Heating Oil, Aluminum, Gold, Corn and Wheat.

Recently in the News

The Wall Street Journal – U.S. Moves to Audit Chinese Firms. Market Frets Over What Comes Next.

The Washington Post – With Fed’s encouragement, corporations accelerate debt binge in hopes of riding out pandemic